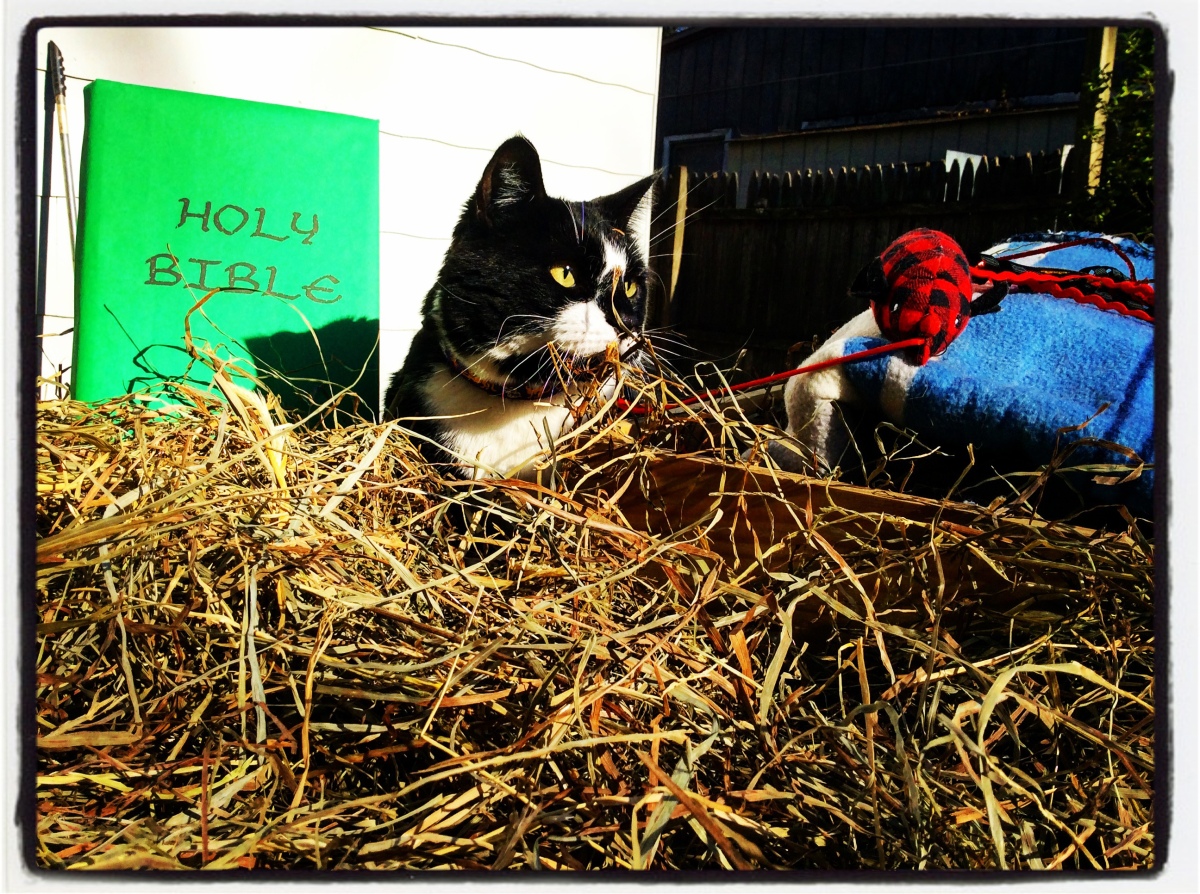 (For this blog post I welcome guest blogger, TeddyBoy Sinclair, my tuxedo cat, who will set the record straight on a number of misconceptions about Christmas.)

Around this time each year (winter), humans like to retell a story about an  infant born in a stable on a pile of straw surrounded by cows, horses, and donkeys in some far off country.  And today humans celebrate this event with food, gifts that sparkle, lights that pierce the darkness, and other stuff.  They call it, “Christmas,” and it supposedly celebrates the birth of this human child, named Jesus.

This story was published in a book, called the Bible, and the authors left out some very important details, plus they got the date wrong.   I feel it’s my job to set the record straight.

First off, it was some of my feline ancestors, the stable cats,  who helped keep the baby Jesus warm.  Forget the donkeys, goats, and sheep who were all too self-absorbed in eating and too big to cuddle with a baby in a manger.  It was the kitty cats that kept him warm–and even played with him.

Another omission from the baby Jesus story includes the gifts that the cats gave to the baby, and his parents, Mary and Joseph. A whole lot of hullabaloo has been paid to three wise men who traveled some distance to bring gifts of gold, myrrha and frankensence (obviously, they forgot the catnip) to the new baby.  But it was the stable cats who caught some mice and presented these rodents as gifts to his parents so they wouldn’t starve.  As far as I know you can’t eat gold, frankincense, and myrrh.

Cats also played a very important role in helping the parents escape the edict of baby-killer Herod, who ordered the death of every child in Bethlehem under the age of two.  The 3 wise men apparently spilled the beans when they asked for directions from Herod’s court to visit a child who would one day be king and wanted to pay him homage.  Herod was very threatened by this future king  (he  apparently had Narcissistic Personality Disorder) and issued this order of murder for all young human lads of a certain age.    The cats warned the parents about Herod’s evil intentions and guided the parents to safety along a secret trail known only to felines.

And allow me to correct one chronological mistake.   The baby Jesus was most likely born in the spring, not in December, so it’s unclear why his birthday is celebrated December 25.  But hey, December 25 is a pagan holiday where there used to be lots of drinking, and wild dancing to chase the winter chill away, so why not celebrate a cute baby’s birth during this day.  But for the record, the humans got the date wrong.

So humans, celebrate this December 25 holiday by spending time with your loved ones (both animal and human), eating good food, drinking, dancing,  singing, and a warm fire (except in California where you should celebrate by embracing water).

Celebrate the winter darkness  which will bring back the longer days of light.  For without the darkness, we cannot fully appreciate the light.